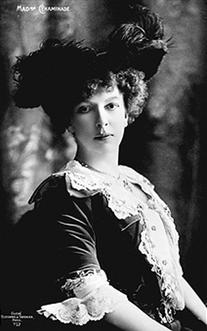 Ann Sears gives talk about the history of
​The Chaminade Music Club at presentation to the North Attleboro Historical Society.

The Chaminade Music Club of Attleboro, named after Cécile Chaminade, was founded in 1912. That same year, she sent to the Club a dedicated copy of her Melodies, acknowledging the honor.

In 1908, Cécile Chaminade appeared in the United States, at Boston's Symphony Hall, in a program of her piano and songs. We have that program, probably attended by a future Club founder, either Mrs. Marion Eccleston (first president, 1912), Mrs. Edna Briggs (president, 1912-1913), or Mrs. Kathleen Rounseville (president 1913-1914).